It’s now my 10th time in this beautiful country leading a trek. This time we are in the middle of the huge European heat wave of Summer 2018. The high pressure and the temperature is quite incredible, day after day of blue skies and lots of sun. We have planned a 4 day trek around the Hardangerjøkulen, the 6th largest glacier in mainland Norway.

We arrived into Bergen Airport via Norwegian air (very comfortable) from London Gatwick airport. I had pre-booked bus tickets to take us with Flybusssen into Bergen city centre and there was a bus waiting for us as we departed the airport. We then had to walk a short distance from the bus station to the train station and get on the 15:58 train from Bergen to Finse. Fortunately everything ran to time and we were able to get all our connections with ease. The 2 1/2 train journey was beautiful as we wound our way up from the coast through mountains and fjords onto the Hardangervidda plateau. 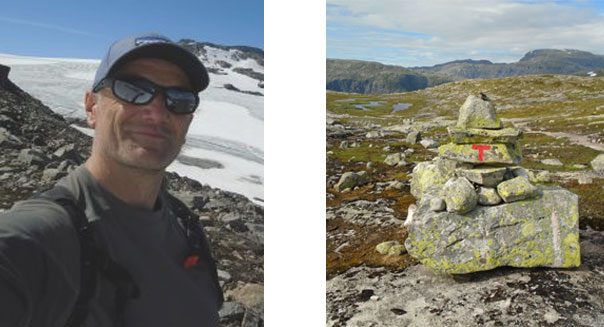 Finse is beautiful- provided you like being in a remote mountain environment where the only way to get there is by walking, bike or train! There are no roads to Finse. The railway station is the highest point of it’s journey in between Bergen and Oslo and at 1222m it can get quite chilly. Also, Finse was used for filming part of the Empire Strikes back film in 1979 and it still resembles the planet Hoth even now.

On our acclimatisation day we headed up onto the Hardangerjøkulen and via the Appelsinhytta hut. We practised climbing snow slopes (and back down again!), some scree slopes and hopped up onto the summit Bukkeskinns-hjellane 1759m with magnificent views over the plateau and surrounding area back towards Finse. The hut was open and we duly signed the visitor book. NB It would be a good place to take refuge during bad weather or during the winter months when there is snow and ice everywhere. 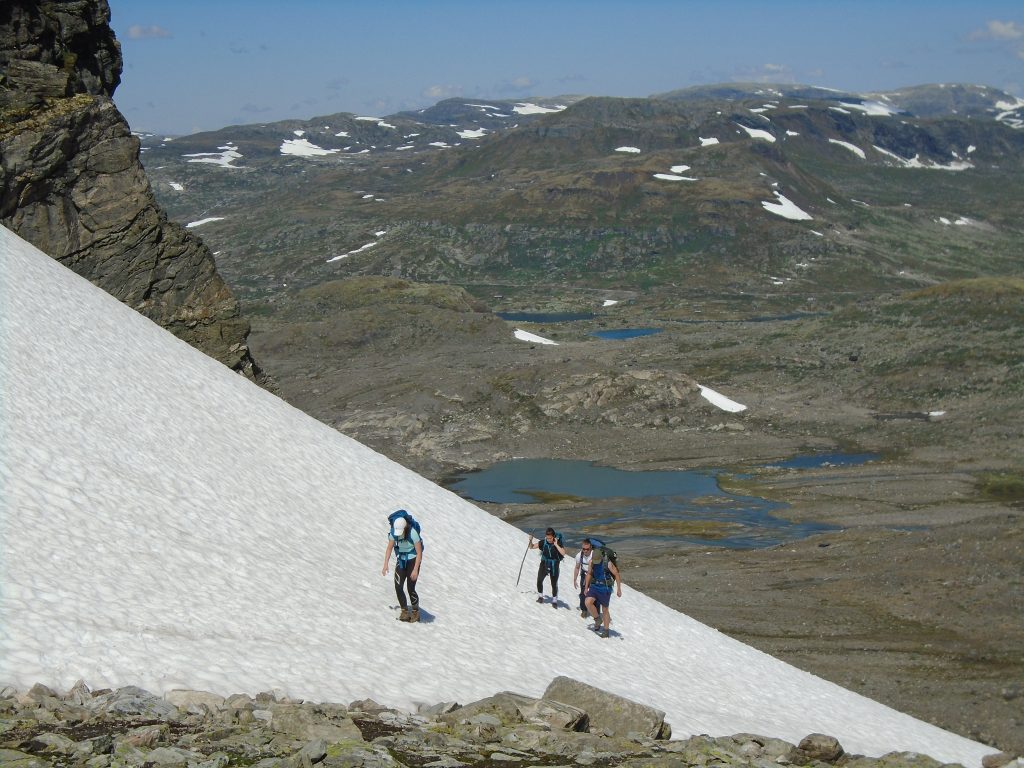 We headed off in a Westerly direction along the disused train line out of Finse, waving good bye to civilisation as we headed off into the wilds of the Hardangervidda. After a couple of Kms we crossed the train line and our first river bridge crossing. The path steadily climbed up to 1500m. There were still a number of snow nevé crossings to be had and I was glad to have spent some time yesterday with the group going over how to safely move over the summer snow.

We passed a number of lakes, some of which were still full of ice bergs and we finally descended down to our lake just before the hut at Rembesdalsseter (985m) where we spent the night. 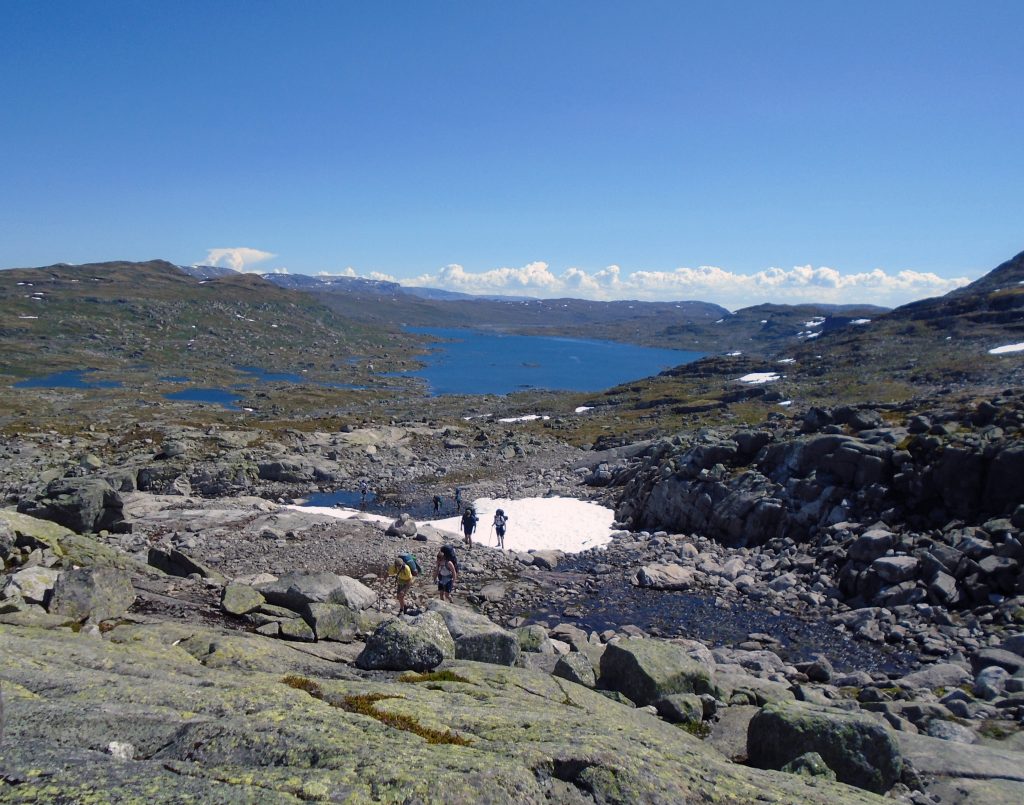 The view back towards Finse in the distance

The day started badly by the group missing the path out of Rembesdalsseter and having to scramble along the hillside about 20m below the actual path! There are two routes from the hut and we decided to take the old route which did have a bridge over the glacial river that you have to cross. However, the bridge has been washed away and  means that you now need to wade across the stream, and that’s quite exciting (and cold!). An easier way is to head South from the hut at Rembesdalsseter toward the dam wall and pick up the new route from there (but it’s not as exciting!) towards Tveit.

We managed to cross the river by mid day (mainly because part of our group decided to head up to the glacier and look for deer antlers for a couple of hours!) and we then headed up onto the top of the plateau with amazing views down the valley to Eidfjjord.

We headed up again onto the high ground in between Store Ishaug and Vetle Ishaug and could then see down to the valley with Fossli, Garden and Maurset below. Rather than walking all the way into Fossli we camped about 1.5Km outside just before the fork in the path so that we could have some quiet space (also it was getting quite late due to the slowness of our river crossing earlier in the day). 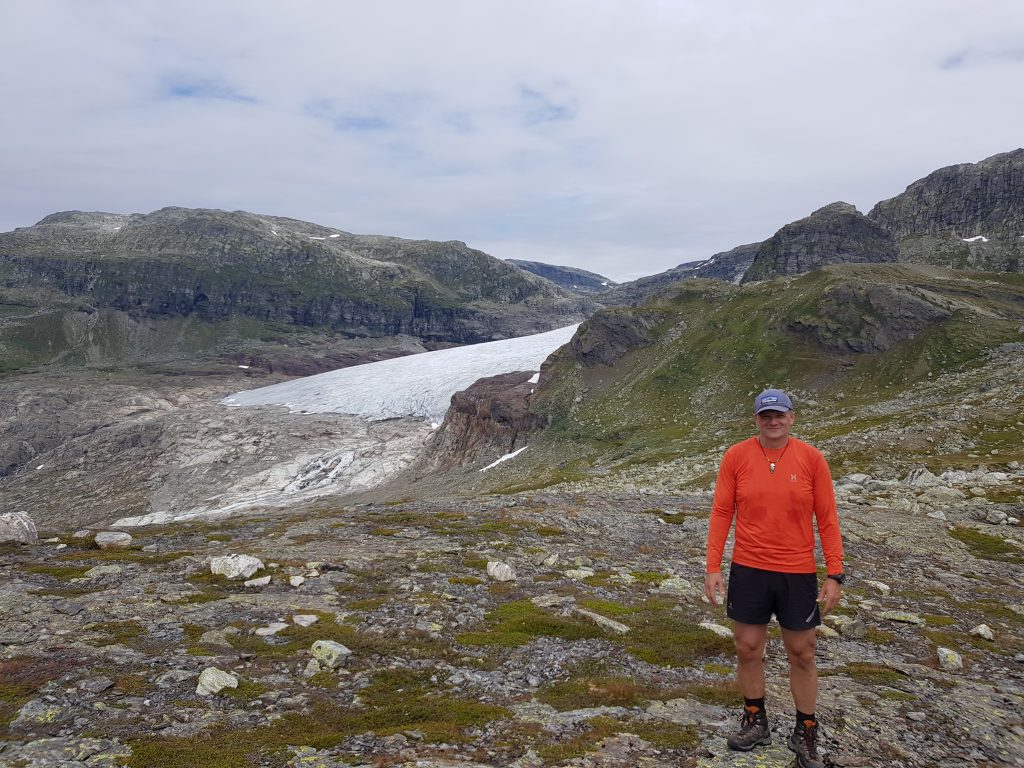 Jeremy Hepworth and the Rembesdalskaka Glacier in the background

We ambled down into Fossli and had to enjoy the home comforts of cake and coke from the hotel. I first visited the area in 1994 and not a lot has changed, except that now the hotel has built some viewing platforms so that you can see over the waterfall more clearly. If you want you can trek down to the base of the waterfall and feel the power of the water as it pounds the rocks. 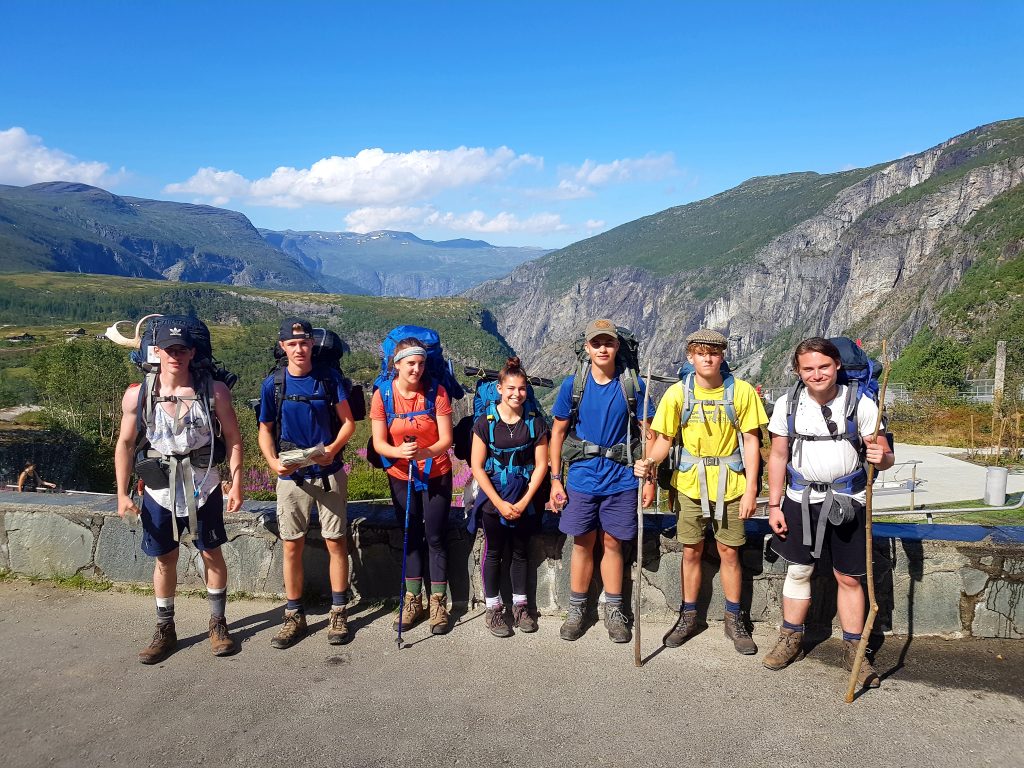 We headed off via the hut at Liseth and climbed back up to the mountain plateau and headed along to the lake at Sysenvatnet. Eventually through twists and turns we ended up at the turn off for Finse, about 3Km before Kjeldebu hut. 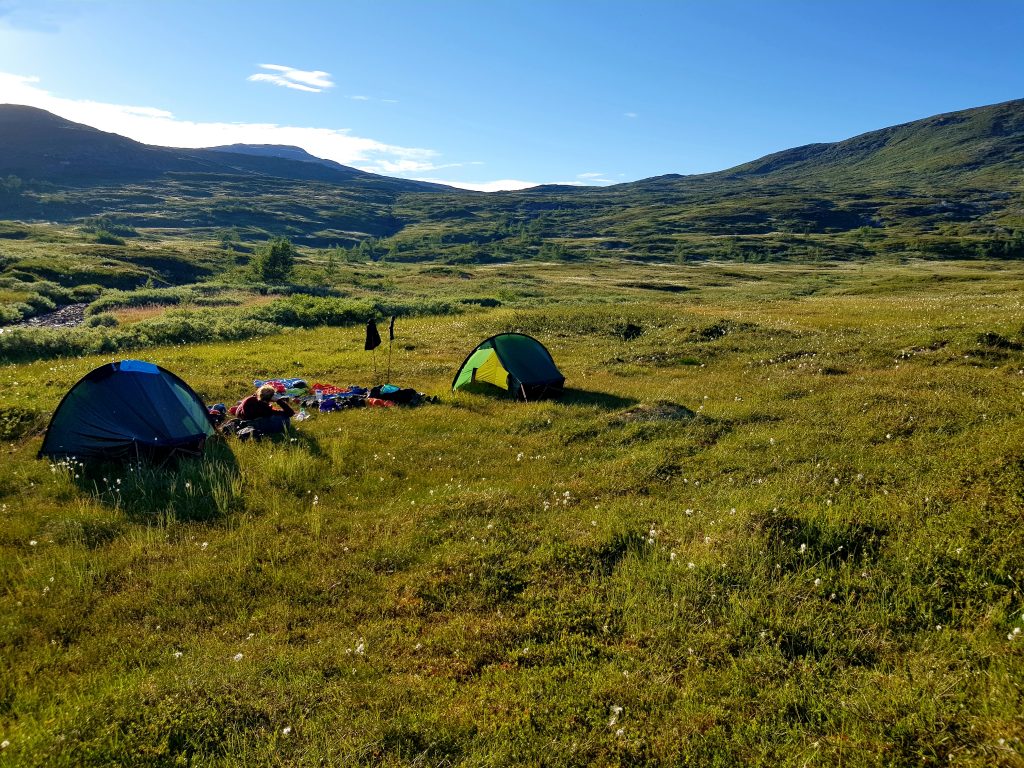 Wild Camp just North of Fossli. We had the whole valley to ourselves.

We are on the final section now of our loop around the glacier as we headed North back to Finse. The highlight of the day was that during the afternoon we were subjected to a mountain storm. We watched thunder and lightening strike down the valley as we made our way through the higher sections of the path before we decided to stop at a lake 4Km before Finse- we had no particular need to get back to Finse that evening and our train was not until the afternoon the next day. So rather than walking in the rain, we set up early camp and played cards.

Fortunately the sun came out in the evening and I was able to climb up a nearby hill to watch the sun set. Magnificent.

The next day we ambled down the path into Finse and a chance to swim in the lake again (brrr) before heading back to Bergen on the train. 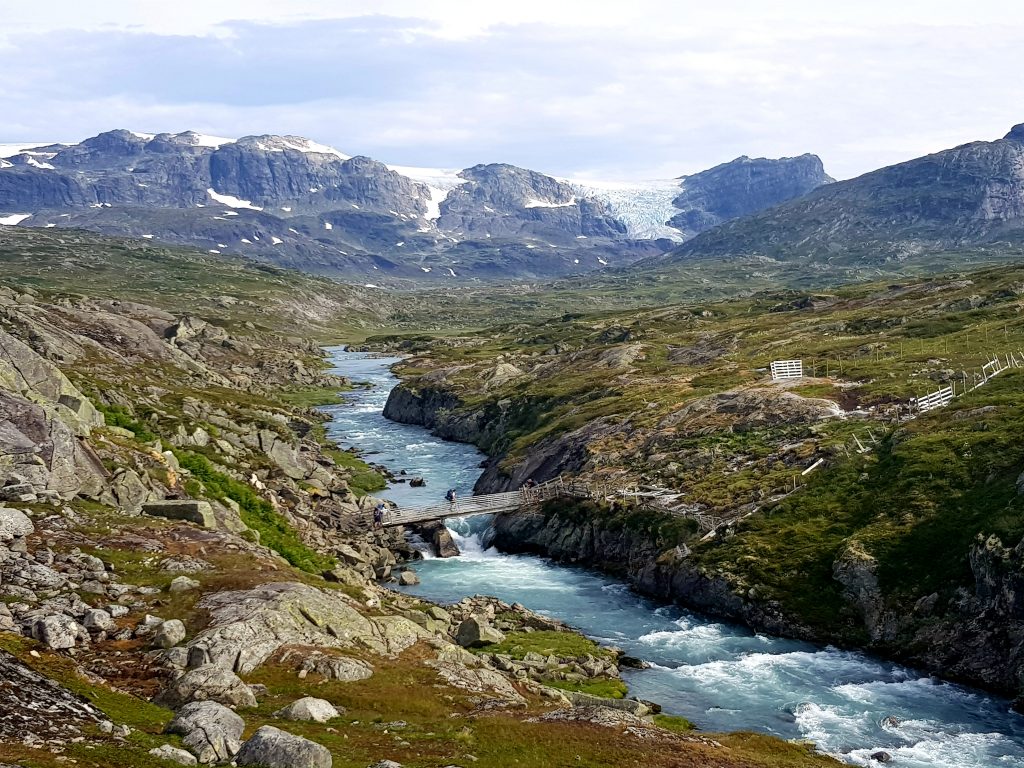 Crossing the river heading North back to Finse

Things to think about: 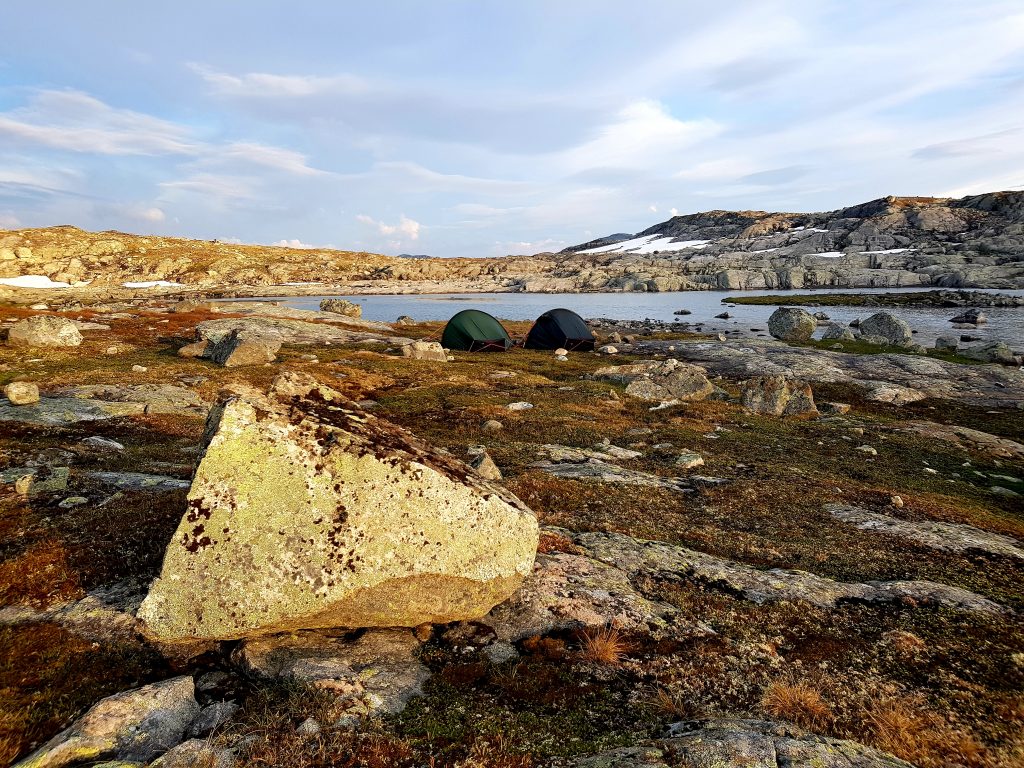 A pair of Hilleberg Atko tents- perfect for this environment