It’s July and we are off on a Gold DofE adventure to Morocco.The group have planned the trek and we are using Imlil as our base camp. A 4 day loop around Jebel Toubkal crossing a number of high passes.

A 3 hour flight from Gatwick airport to Marakesh with EasyJet was great apart from the fact that I managed to book us on the first flight of the day (oh why I ask myself?) so we flew out at 0600- having to check in 2 hours before and therefore waking in the middle of the night to depart… Hey ho!
We were met at the airport by my taxi driver who took us all the way to our guest house at Imlil about 1 1/2 hours away. Our arrival at the end of the morning meant that we were encouraged to have some fresh tea- a delicacy that is uniquely Moroccan. It was incredible to be sitting in a Moroccan garden drinking tea at 11am when we had been in the UK earlier that morning.

We were given a choice of accommodation options and the team chose to sleep on the roof- again uniquely Moroccan. The stars and milky way were something else as we looked up at the skies later in the evening. Amazing. 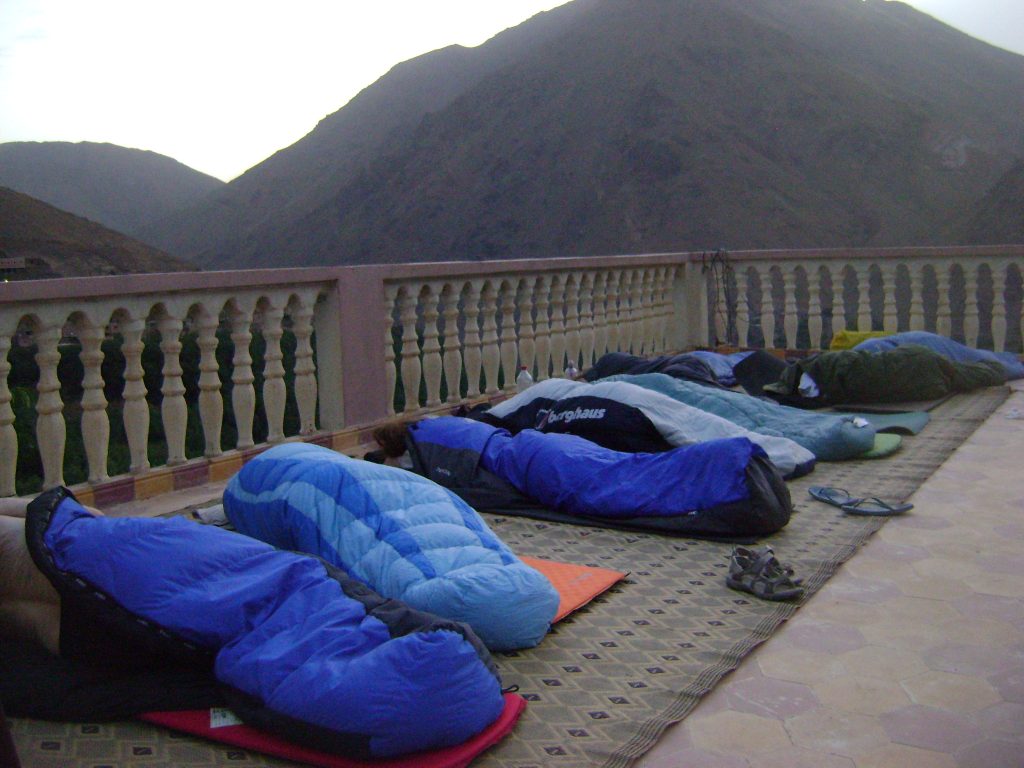 The next day was spent sorting out food and discussing our route over the next 4 days. Imlil lies at 1700m and virtually everywhere is up so it was useful to spend a day sorting out things and pottering around. The hotel owner couldn’t believe that we didn’t want a mule to carry our back packs- trying to communicate the 20 conditions for the DofE scheme in pigeon French to an Arab was quite difficult. 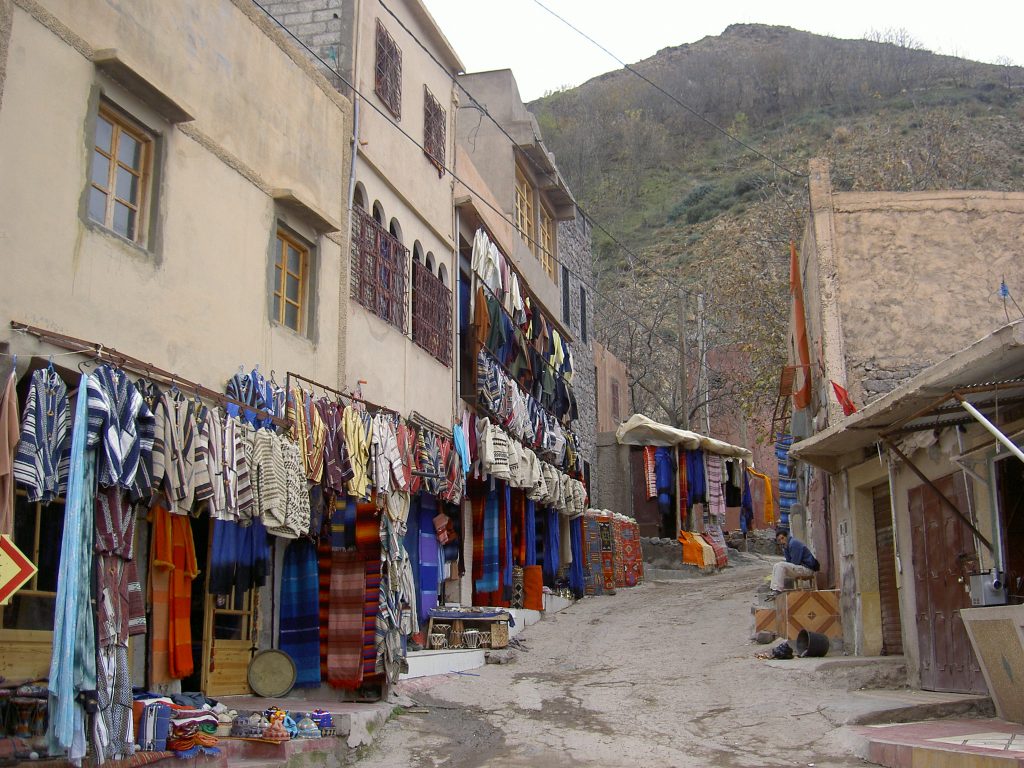 A slight change in plan meant that we hopped into a taxi which took us about half an hour East from Imlil to the start of our trek.The tarmac (?) road finishes in Tacheddirt and a series of paths zig zag their way up the hillside. 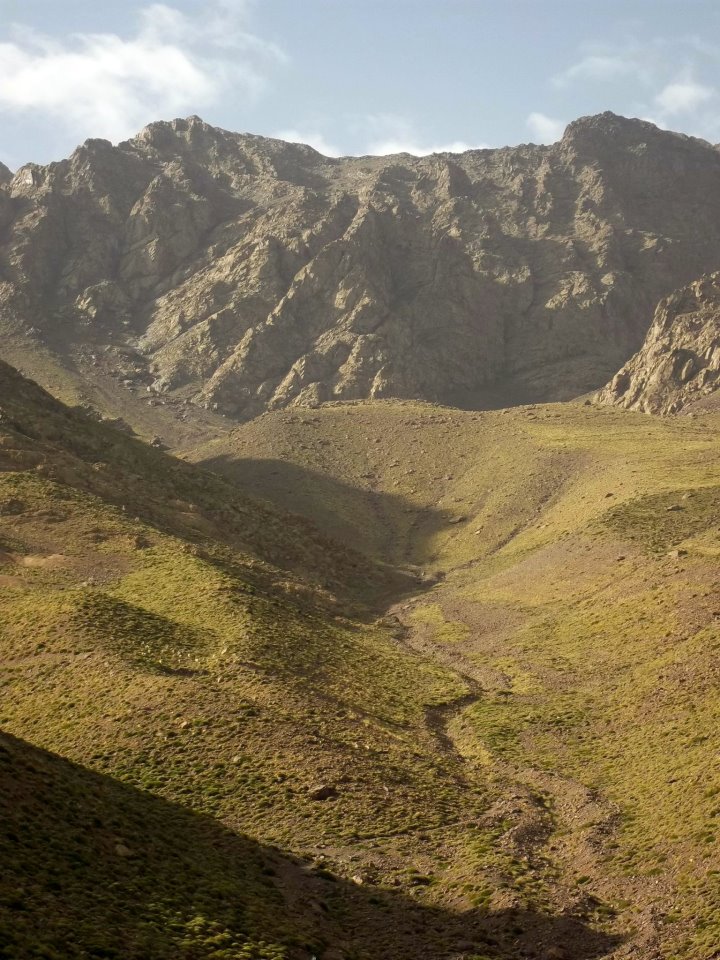 We certainly noticed the altitude having just come from sea level in the UK. Tacheddirt is at 2314m and we needed to cross the Tizi Likemt col at 3625. The only way was up! A steady plod was called for and in a couple of hours I was at the col- the group however, found it a bit more tiresome and after several rest stops they too crossed the col. 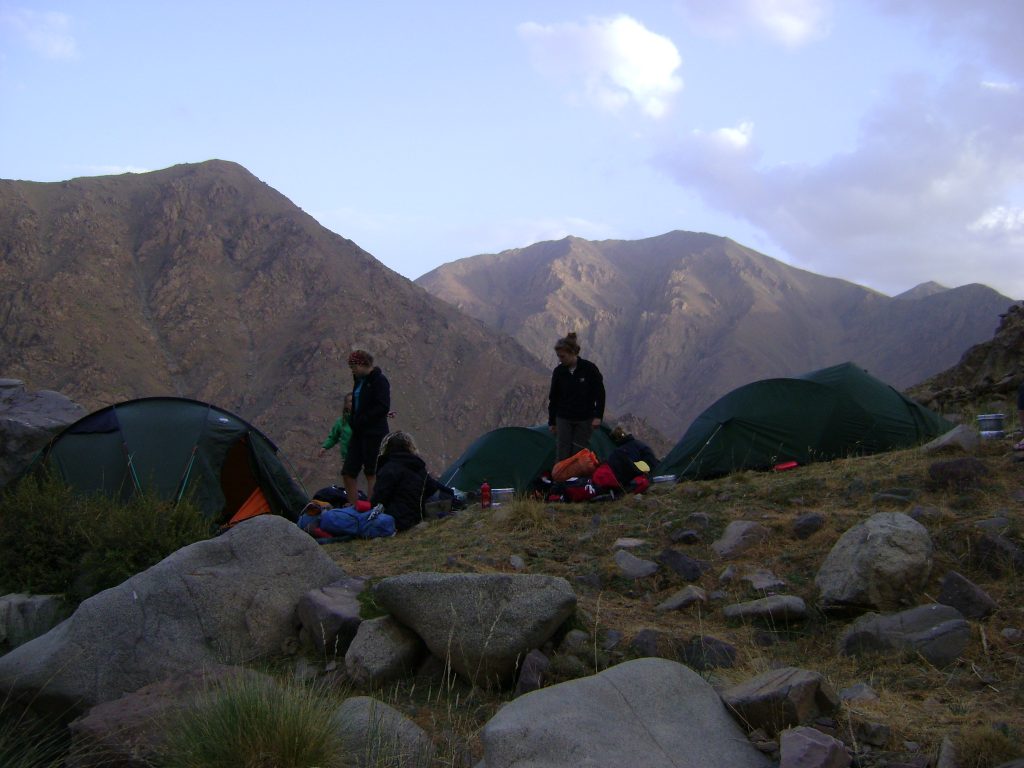 The next day we woke early to drop further down towards AzibTamenzift and then south towards Tizi n’Ououraine 3120m the high point of our day. The group decided that it was a good idea to follow the stream rather than the path which was fine until they ended up below a waterfall and we looked down on them from about 100 foot above!
Rather than turn around they then spent about 2 hours playing in the waterfall and enjoying being cooled by the water. This meant that we were not at the col until late in the day and not down to Amzouzart (1740m) until late in the afternoon. The trek up from Amzouzart to Lago do Ifni (2312m) was a slog. Hard hard work and it was a long day- 15 hours in total for the group. 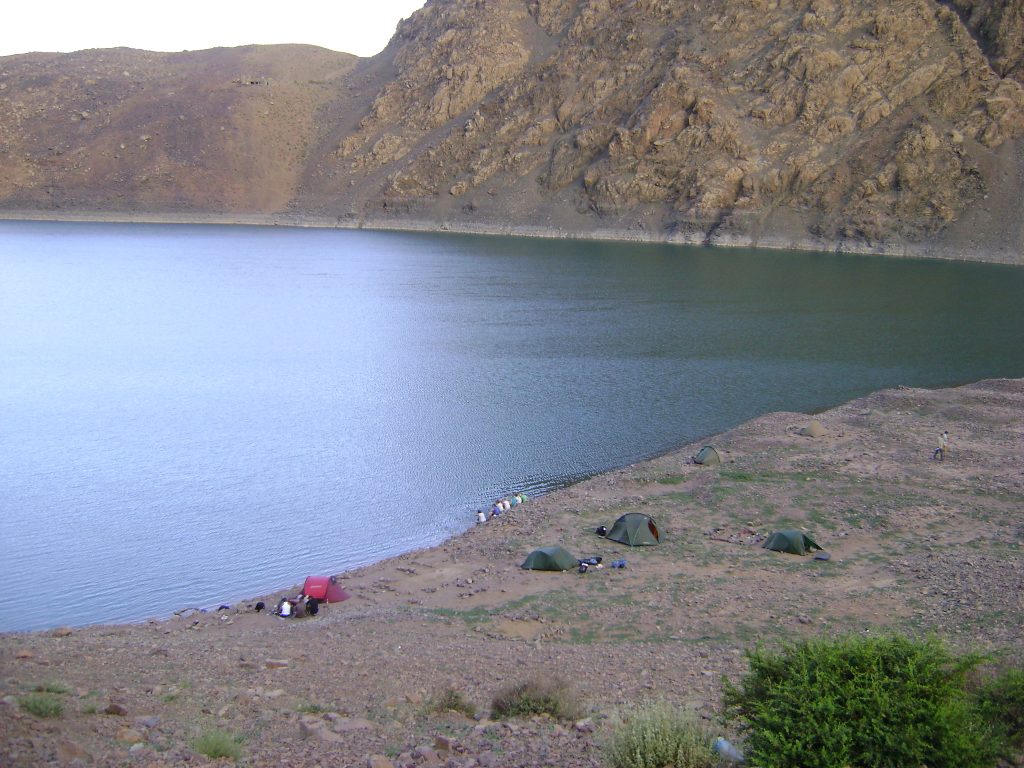 Well there are worse places to make a camp and we managed to swim, play cards, sleep, swim, play cards…. oh and eat too. It’s a magnificent place and there is a little community of Berber tribes-people who live up there and can offer simple food and the occasional coke too! 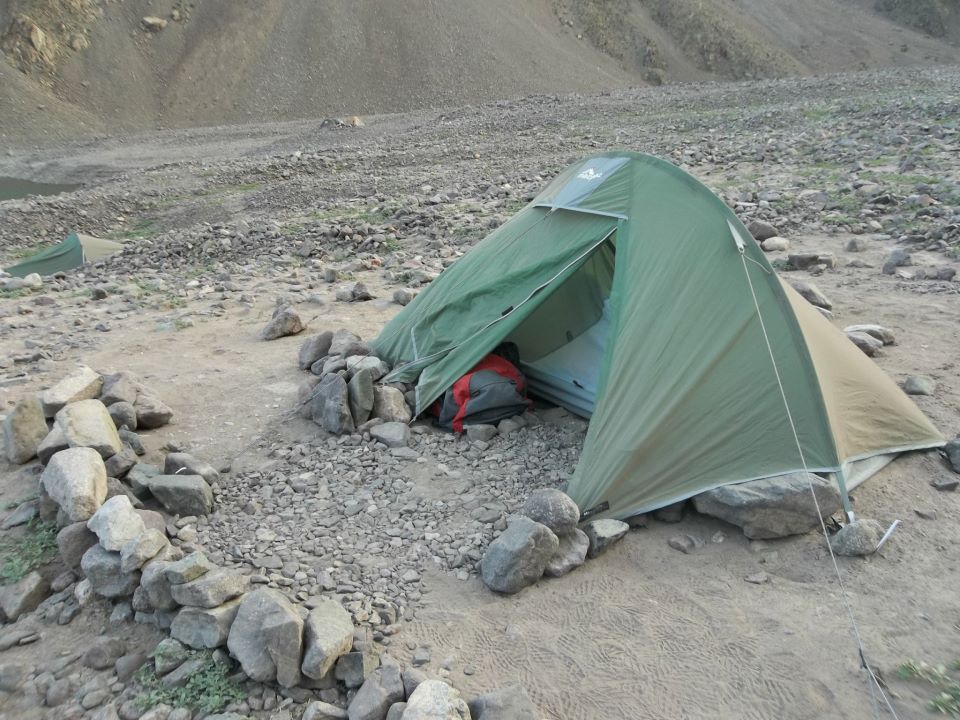 Well what else is there to do when you have time on your hands?

We set off in the dark, eager to get as much climbing done before the temperatures rose again. Out of the back of the lake a path took us steadily to the col at Tizi n’Ouanoums at 3680m and we could see the summit of Jebel Toubkal at 4167m to our right. 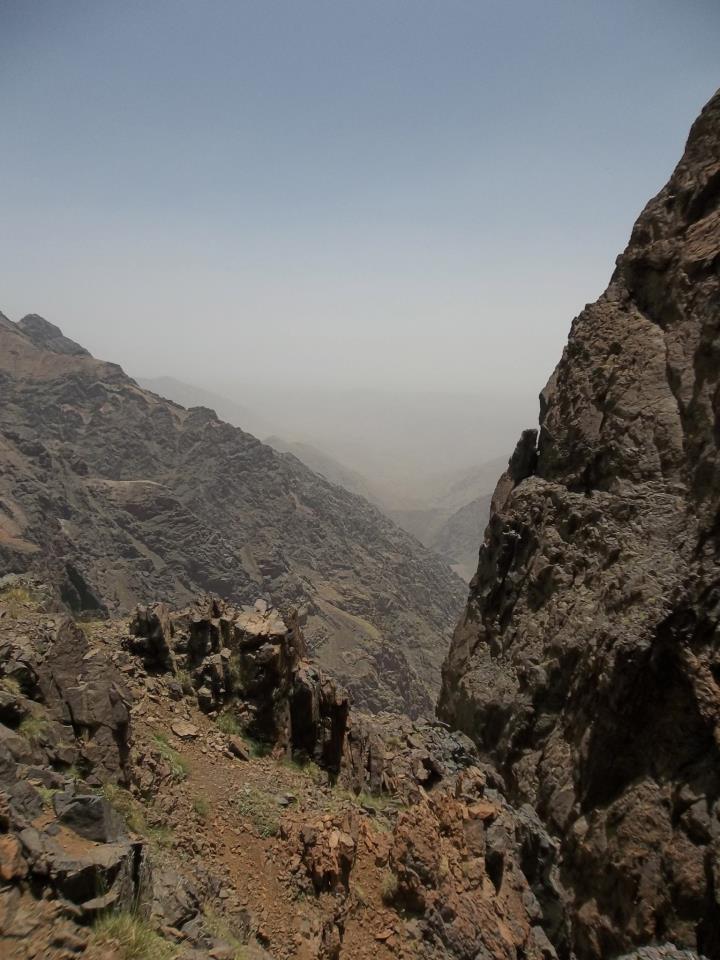 We descended down to the CAF refuge at 3200m and civilisation! People, noise, donkeys, it was all happening around the refuge, including a large number of European travellers, something we had not seen for a few days. 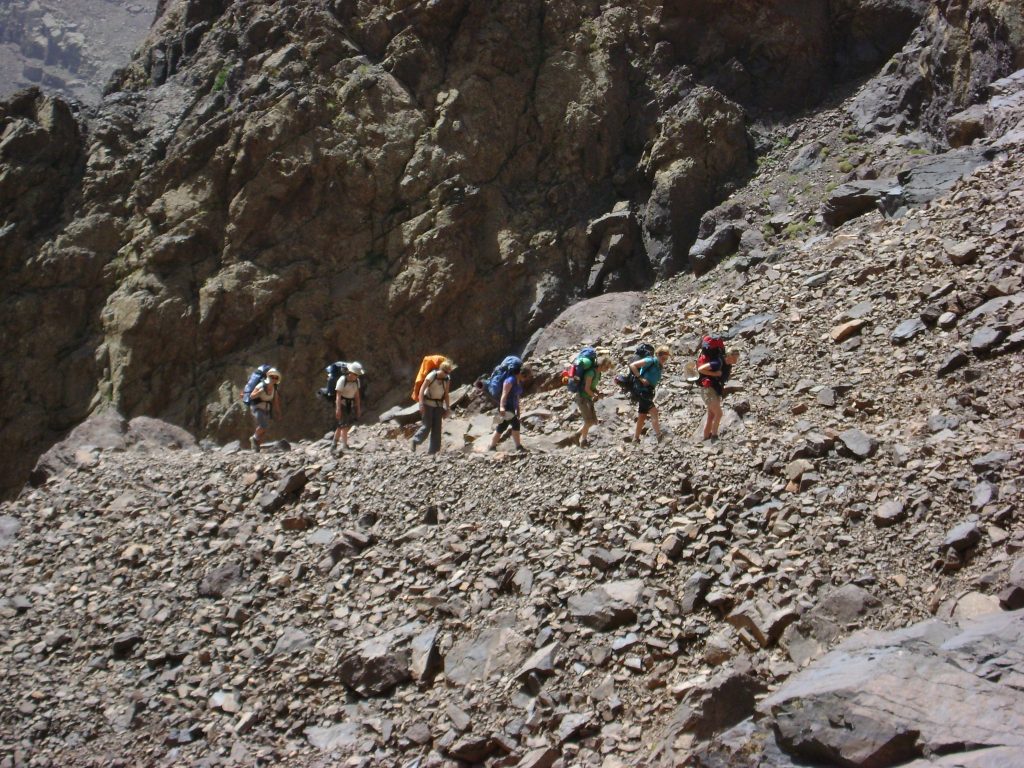 There was the option of heading back up and bagging the Jebel Toubkal summit (a 3 hour trek/ slog) but the group decided that they had had enough and wanted to head back to Imlil that morning.  We passed a number of groups heading up on their way to the refuge and also a large number of dukkas/ shops/ trading stations where you could get fresh orange juice and omelettes. Such a refreshing change from boil in the bag food that we had been eating for the past 3 days. 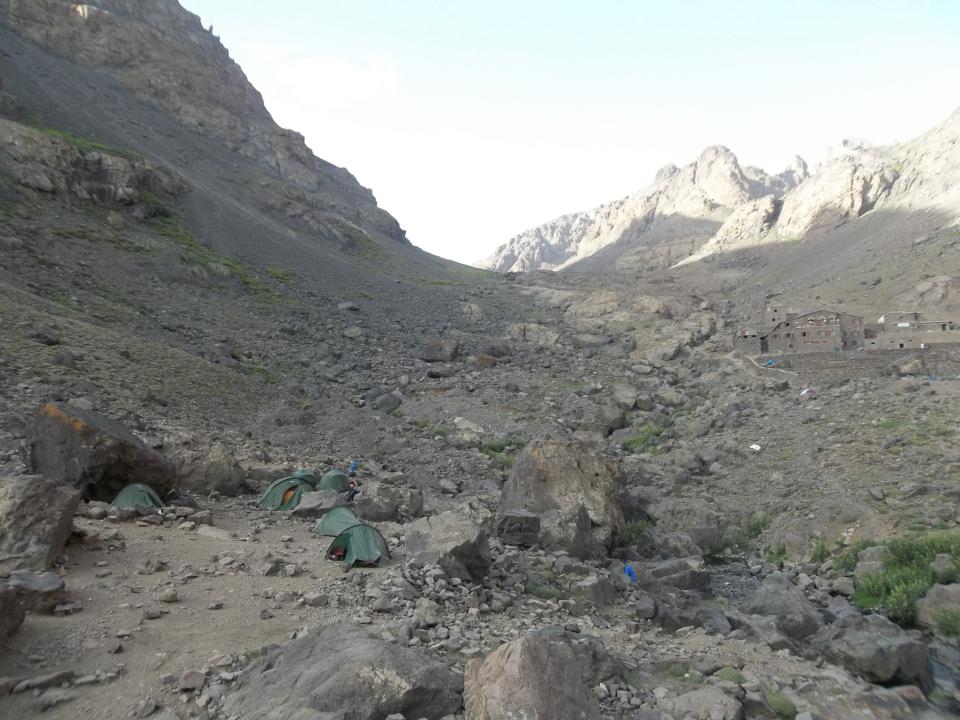 It was a long descent down the valley to Imlil and took most of the day, on the way we headed past Sidi (Saint) Charmharouch at 2350m which is a collection of Berber shops and where some people make a pilgrimage and sacrifice animals.

The valley becomes wider and we passed through the town of Aremd (1945m) before finally descending into Imlil. What a trip!

We spent the night (again on the roof because the group wanted the view) resting at our gite before being taken down into Marrakesh by our taxi. The day was spent cleaning up and being a tourist looking at the various leather, herb/ spices and carpet shops as well as enjoying the coffee. 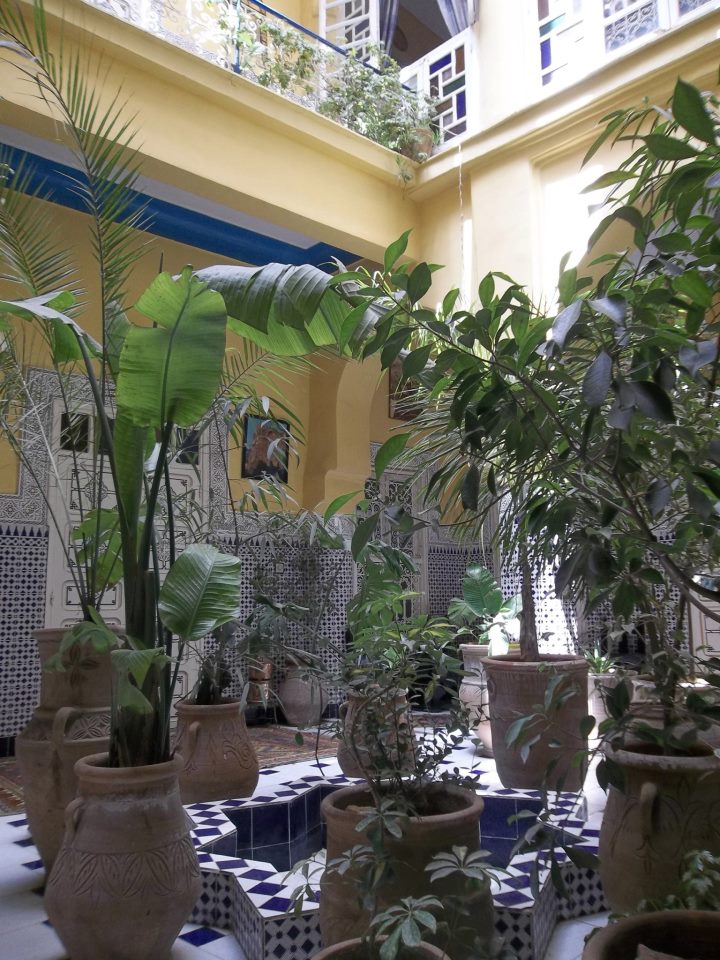 I would love to say that we all then returned smoothly back to the UK, however, a bug that was shared from food we took at one of the restaurants in the square meant that most of the group were up all night being ill. The following day a delay on our flight meant that rather than arriving back at 2pm we actually returned at 2am the following day. What a mess and slightly took the edge off our return. However, we all made it back and could then recover in the UK.

Things to think about for next time 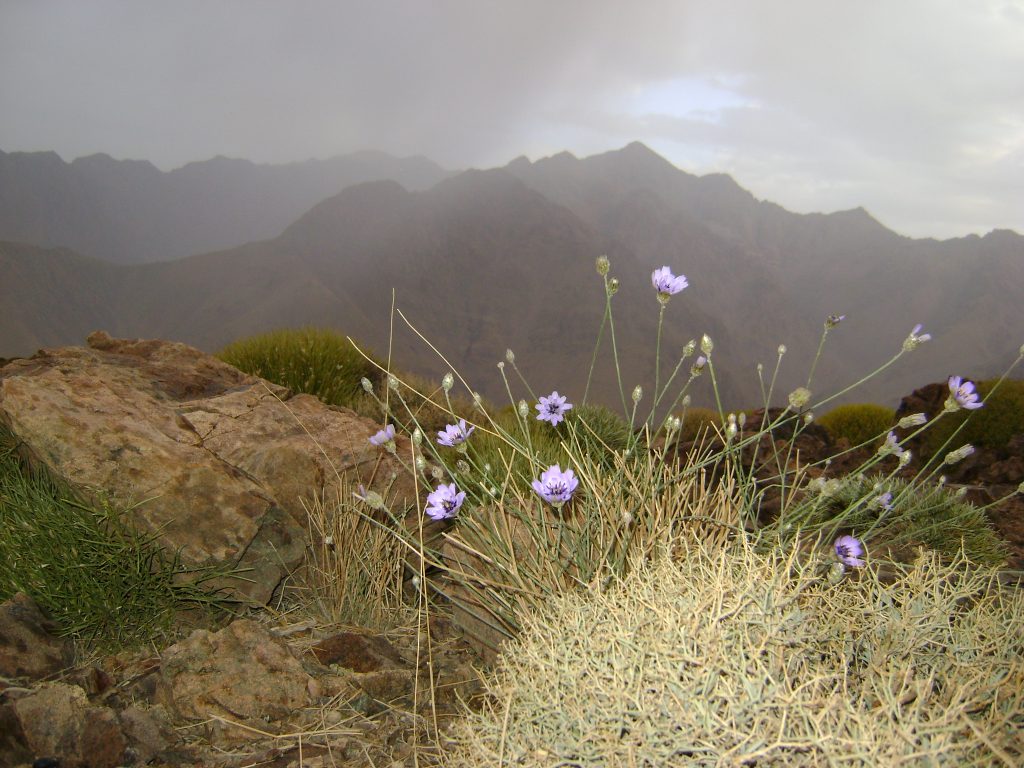